Hello Death are pleased to announce the release of their third full Length album, “For Those With Many Hearts”. Recorded over a cold rainy weekend, in a barn called Speckled Chemistry Studios, the songs look alternately down from a mountain and up from a hole to explore themes of time, love, decay, growth, memory, and resolve. “Moody folk outfit Hello Death excels at sparse, haunting music that works it’s way into your bones like a winter chill…the group doesn’t so much perform folk music as suggest it; Allschwang’s gorgeously airy alto, Heuer’s Nick Cave-esque baritone, and the group’s stripped down instrumentation combine to form a sound that seems to pre-date music itself”. -Milwaukee Record 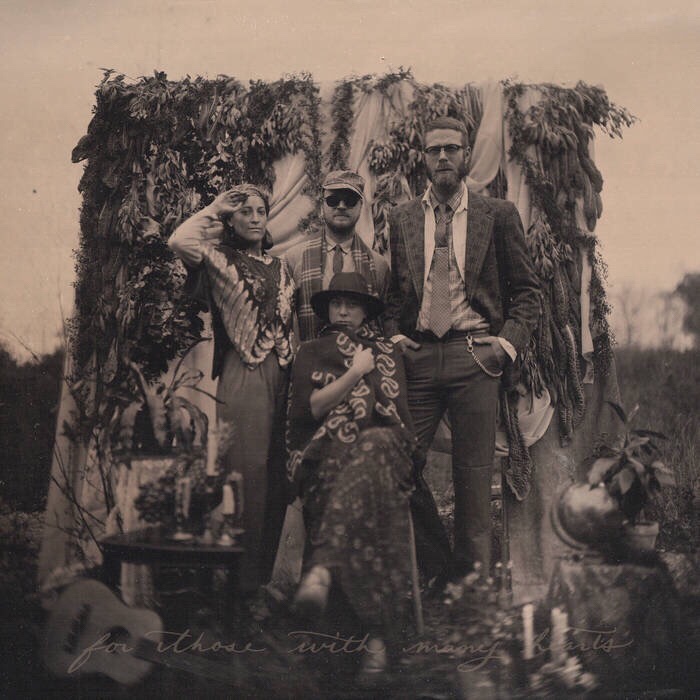 The police are executing people in our streets.  The police are murdering Black and Brown people in front of us and are blaming the victims.  The media is largely enforcing false narratives.  Let’s face the facts.  This is not an undercurrent of a race war.  The talk of war is rhetoric that enables capitalists to control our fears and continue to profit from our bodies.  Even the police should have picked up on the fact that they are only protecting profiteers.  The real narrative is that the majority of people are sick and tired of the racist, classist, and sexist system.

In April 2014 Dontre Hamilton was murdered by police officer Christopher Manney in Red Arrow Park, in downtown Milwaukee.  He was frisked against protocol and threatened with the officer’s baton before being shot 14 times.  No criminal charges have been brought against Manney, though he was fired from the force in October of that year for instigating the conflict.

I wrote Tin House to help process my feelings of disgust and anger at our nation’s continued institutional racism, to help process my white guilt, to help process my sadness and denial, and to try to understand what it would feel like to be constantly put-upon by the false notions of strangers.  We now live in a tin house.  Each single drop echoes.  They are recorded and played back again and again.  History will no longer be written by the oppressors.  We all hear the rain in Sanford, Chicago, New York, Milwaukee, Minneapolis, Ferguson, Baton Rouge, Dallas, Oakland…every city in the USA.   And still it continues.

In January of 2016 the Dakota Access Pipeline was approved despite the lack of any thorough environmental assessment.  The proposed oil pipeline would cross the Missouri River less than one mile from the Standing Rock Reservation, risking contamination to the immediate area and to the millions of people who rely on its water.  In April the Sacred Stone Camp was established to protect the water.  Since that time, the movement to protect the water has grown.  Militarized police have reacted to peaceful prayer and protest with the use of rubber bullets, mace, water cannons, and concussion grenades.  They chose to aggressively push aside the rights of our fellow citizens in order to push the agenda of a private corporation acting illegally on land that rightfully belongs to the Standing Rock Sioux tribe.

On January 20, 2017, a racist, sexist, narcissistic, and self-serving coward will become the President of the United States of America. Of the total U.S. population, 82% of Americans did not vote for him. My hope is that these tragedies will serve to galvanize this vast majority of people who understand that to seek a better life means seeking a better life for all.

This is not the house I built.
This is not my home.
These strangers used to hold regard for those that toiled alone.
Look me in the eye and pray I keep this in my head.

The rows are plowed, but they are paved so death will wash away
On foot we walk to raise the graves where future seeds may lay.

This is small gesture, but please accept this song as a gift, and consider donating to the following organizations:

At the least, I hope this song can provide some time for quiet contemplation, at best, a way to help process the wrongs and call for a better tomorrow.

Hello Death has a few shows coming up and we’d love to see your face;

Here’s how we spent our Sunday,

We are honored to take the stage at Club Garibaldi with the talented Christopher Paul Stelling.  We’ve been lucky enough to share several stages with this powerhouse.  We hope to see you there.

at Company Brewing
Starting at 10PM:

New Boyz Club
Pre-show at the

We are proud to working with local Milwaukee label GLOSS RECORDS for the release of our second album.  Find all the details here:

One year ago we visited the Journal Sentinal building in Milwaukee to record a live performance of our song ‘on a quiet winter night‘.  At long last, we recorded a studio version with Rob Hickey at the Tannery and it is available for free on bandcamp as a token of appreciation for all the support we’ve been given.  Thank you, and we hope you enjoy.

We are honored to join an amazing cross-section of Milwaukee musicians to pay homage to one of rock’s greats for Smith Uncovered. A re-interpretation of the songs of Patti Smith at Alverno College Pitman Theatre, curated by the ever talented Betty Blexrud-Strigens.
It’s been difficult to take Patti Smith out of her songs. They have such immense heartbeats, and are so unique to her, that we risked killing the patient on the table. As we rehearsed, we were humbled again and again, trying to know what each song means to us, and sounds like with us as vehicles.
It struck me at one point that Smith, unlike other rockers, is in part amazing because the type of destruction she brings is always a seed. She’s a tree root cracking the sidewalk or a forest fire. She never seems snide or exclusive when she points her finger at authority to try to figure out where to go next.
With this in mind, I think we’ve finally reached a point where our voices are the ones speaking and Patti Smith is the inspiration and the guide. I believe this will be true for the audience as well and I hope you can join us.
– Nathaniel

Our labor of love made the cut for the Cream City Cinema Milwaukee Show at the MFF for 2014. We are grateful for all the help we received while undertaking this project and we are incredibly proud of the result. We’ll announce date and times for the screening as soon as we know.

Hello Death is pleased to share a stage again with our Eau Claire friends Adelyn Rose. If you missed them last time they came to town here is your chance for redemption. Also playing are the lovely Softly, Dear.

hello death
Create a free website or blog at WordPress.com.